So I looked at the scenery,
She read her magazine;
And the moon rose over an open field.
“Kathy, I’m lost”, I said,
Though I knew she was sleeping.
“I’m empty and aching and
I don’t know why.”Counting the cars
On the New Jersey Turnpike
They’ve all come
To look for America,
All come to look for America,
All come to look for America.
-Simon and Garfunkel, “America.”
My wife and I spent three weeks on the road.   We drove a grand total of 5,024 miles to explore the Upper Midwest and the Northeast with what is billed as the “Coolest Camper Ever.” Now the thing is, this camper is really just superbly-designed tent-on-a-trailer. It is a very utilitarian camper, one that when compared to RVs and bigass trailers, is as Spartan as a Walmart tent. While the Sylvan Sport GO is great camper, it does not have all the creature comforts one is used to, especially after a number of years of recovering from multiple surgeries and learning to live with limited mobility. This was going to be a challenge for Melinda. While she was all in on it, I was of two minds knowing that a trip like this could build and strengthen a relationship or tear it apart.
Or just leave it as it is with deep new scars.
We survived. We emerged with a stronger relationship and a continuation of the rediscovery that began on the trip from Philadelphia to Joplin back in May. Recovery from multiple surgeries is challenging enough. When these surgeries leave one still disabled and in chronic pain, it is easy to shut down and to just quit. Melinda has been working hard for months to break out of that mode. What she accomplished on this trip by hanging in and dealing with pain and discomfort and camping is pretty damn impressive. When it hurts to walk all the damn time, the last thing one wants is have a fifty or hundred and fifty-yard walk to the washroom. She did it though
And we had a great time.
This trip started out with choosing between two conferences: One in Charleston, SC and the other in Minneapolis, MN. Summertime and the fact that Melinda needed Wisconsin, Michigan, and Rhode Island to complete her list of the lower 48 states she has visited, and I needed Michigan, Minneapolis as part of an epic road trip was the obvious choice. We did a trip like this in 2000 when our son was nine. That trip started in Oregon and created a funky loop passing through Crater Lake, Dinosaur National Monument, Santa Fe, Joplin, MO, the Field of Dreams, Rushmore. Crazy Horse, Devil’s Tower, Yellowstone, and Grand Coulee. That was a camping trip. With a monster tent that I hated setting up.
We did this summer’s trip in style. Just about as minimalist as a tent, but in style.

Our Sylvan Sport GO set up at Brevort Lake, MI.

The SylvanSport GO is the coolest camper ever. (It says so on it’s side.) At 840 lbs it is towable by just about any car. Further, it hardly impacts the fuel economy of our Cherokee. I can set it up completely by myself, without rushing, in 26 minutes, including the awning (which takes about 6 minutes of the 26). This thing is incredibly well-engineered and flexible. For someone like me who really values utilitarianism, this just about a dream come true.
We ended our first day of driving in Cleveland at the Rock and Roll Hall of Fame and Museum. That was fun and I could have spent a lot more time there. Especially since the museum pays homage to all the forms of music that influenced the development of rock and roll, like my hero, Pete Seeger.

Pete Seeger display at the Rock and Roll Hall of Fame and Museum consisting of his banjo head with the stenciling “This machine surrounds hate and forces it to surrender.”

We made it Minneapolis and parked the trailer at an Extra Space Storage center north of the city. First month’s rent free, $25 dollar setup fee, canceled at the end of the week. Total cost for storage, $25 – far cheaper than parking the car in the city. Next time we might leave both vehicles in storage.

A Google Map image showing the route of our travels.

We left Minneapolis on a Friday for Eagle River, WI and a private campground. Along the way I saw a family of Sandhill Cranes in a field. I wish I had been able to get a picture because they were pretty special – I hadn’t anticipated them. Our next stop was Marquette, MI on the shores of Lake Superior and a very nice National Forest Service campground on Brevort Lake across the highway from Lake Michigan. The picture above of the camper is from that campground. 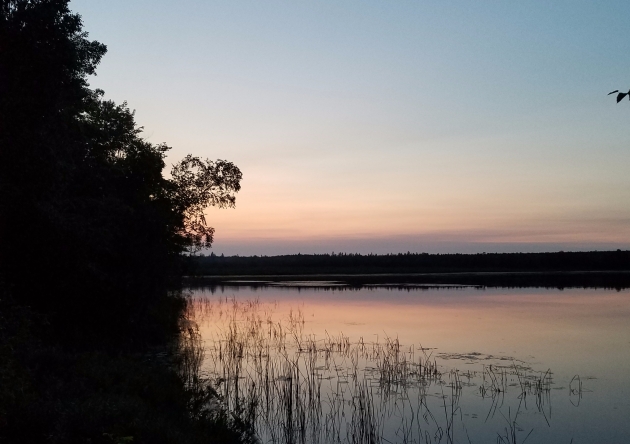 Because of a dropped cellphone and a kind soul, we spent a day returning the 150 miles to Marquette and back. This allowed us to experience pasties (pass-tees) and Michigan cheese curds and to explore a little more of shores of Lake Superior and Lake Michigan, both of which were pretty great.

On the shores of Lake Superior with a bronze sasquatch staring at me and my cheese curds.

We left Brevort Lake and crossed the bridge between Lake Huron and Lake Michigan into Mackinaw City Where we found laundromat and pizza delivery. It was kind of like the island (peninsula, really) of Lost Socks. 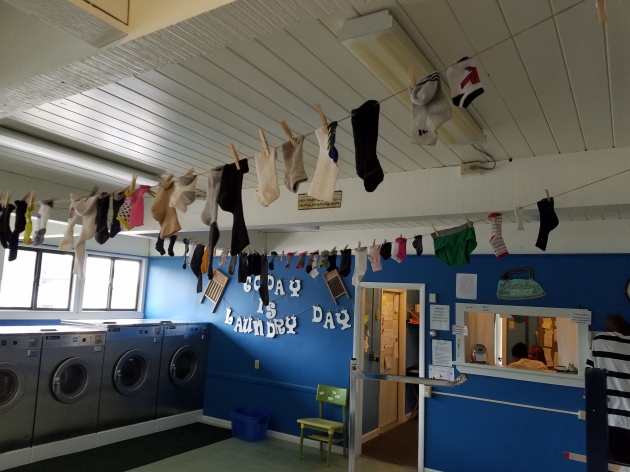 Lost socks hanging from clothes line of the ceiling of laundromat in Mackinaw City.

At this point in the trip, we started experiencing some anxiety. The lost cellphone, the changing of plans resulting in missing planned visits to a museum and Mackinac Island, and just the general anticipation of a rugged campsite without running water became too much. So we did a motel night to rest and regroup. I had anticipated this might be a necessity at least once, so it wasn’t a big deal. In fact, I really wasn’t sure how many consecutive nights camping we would make. Melinda hadn’t camped in years and life has changed quite a lot since the last time.
We finished the trek across Michigan and crossed the border into Ontario. I’m thinking about spending a summer in that part of the province. I want to make that same drive, about 15-20 minutes a day. Why? It seems that is how far apart the exits are that lead to at least one golf course. I figure this would give me a month of playing time, twice a day, without much stress. At least until I got close to Toronto and Niagara and all the crazy traffic.
The RV park in Niagara was multicultural. Definitely moreso than than the others we used.  There were also plenty of short-term campers in the section we were in as campers left daily and new ones arrived.
I saw Niagara Falls in 2001 when in Toronto for a conference. (That was the trip I took off driving without any documents about where I was going other than “Toronto.” Fortunately, I realized after just a  few hours on the road and was able to contact a colleague for the hotel name.) They haven’t changed much. Still an awful lot of water being pushed off of high cliffs and splashing against rocks and more water. Impressive and lovely but not really enough so to just hang around all day with thousands of goofy strangers. Melinda ended up feeling the same way, so we explored, had lunch and went to the casino. The casino was a bust – we had much better luck at Christmas Casino in Christmas, MI.
After Niagara we headed for Massachusetts to see our son and fiancee. This campground (private) presented a new set of challenges. In Wisconsin the walk to the washroom was short, level, and on soft ground. In Michigan the walk was quite a bit longer (150 yards all told) but still basically soft and flat. In Massachusetts it was a shorter walk, but up and down some steep little hills with a surface of broken asphalt and rock. This was a challenge for Melinda, day and night, but most especially at night. She handled it though. And so did I. I walked with her as much as four times a night, hand-in-hand. There is something special about being awakened from a sound sleep to take a walk in the middle of the night with your love. I don’t think I ever got irritated being awakened as I knew she wanted and needed me to help steady her and prevent her from going astray in the dark. (The latter can happen. It did. Just once.) I think this helped spur  the greater closeness we found together. 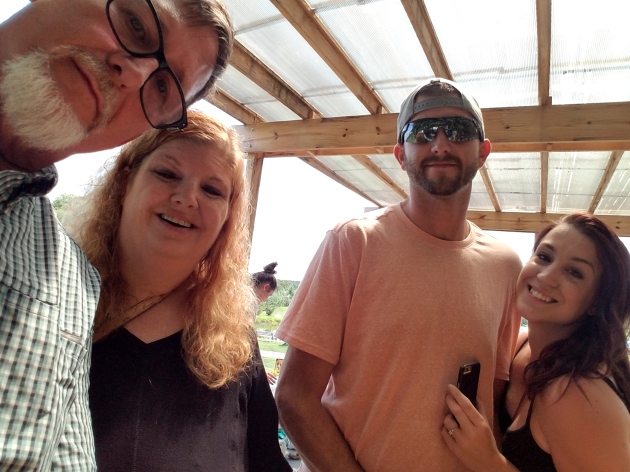 Us. Me, Melinda, Zach, and Kristen.

Skill development. Learning to whistle or screech with a blade of grass.

Anyhow, we spent a delightful weekend with the young couple.
Time at a winery for a tasting, lunch, and then some very silly card games. Because of crowds and how the state shuts the park down at capacity, we were not able to get in and walk around Walden’s Pond, thus sparing friends and family a gratuitous post of Zach and me thorowing a Frisbee around. That was my biggest regret of the trip. We did at least see the pond from the road …not more than a stone’s thorow away.
We drove next to Acacia National Park in Maine. We noted the eclipse while stopping at a backroads grocery store, but we didn’t really pay it much mind. We were more concerned about lobster rolls, blueberries, and getting to the Schoodic Campground, which is on the mainland section of the park. It is a very sweet campground. Not as heavily trafficked as the island and thus much quieter and more sedate. It just takes longer to get to it as it about 40 miles from the park’s headquarters. It truly is lovely and the skies are dark. The first couple of nights there I just marveled at the stars and the Milky Way, the way I had on the Upper Peninsula. The third night, well, it was raining. There are some marvelous little hikes in the park.

A rock wall along one trails at Acadia NP.

Our last night camping was spent at the Winhall Brook Forest Service campground about 30 miles north Brattleboro, VT. It was lovely and pleasant in the mountains along a trout stream, with great campsites and facilities.
But it was a long, slow slug getting home, mainly just trying to get across, and then out of, New Jersey and avoiding I-95 until the very end. We made it  home close to midnight in better shape than when we left. We were tired, but friends. We were also much closer than we have been in years as a couple. Yes, we have been close as a caregiver and patient, but that is a different and difficult relationship, one that we have been moving away from. For three weeks there was an enforced proximity of travel and with it a commitment to see the journey through that caused us both to be more willing to stop, take a breath, think, and then act or speak. It was helped by the fact that both of us have been working on mindfulness and meditative practice as part of our self-care.
All the work I have done on self-care was a big part of what made this trip a success. Taking time to find peace and inner calmness is one thing. Putting your body and mind in a state where those things can be achieved and appreciated is a whole other thing. Self-care is really a part of relationship care that we don’t talk about enough. It is much easier to be there for someone else when you have taken care of yourself.