When we traveled over the holidays, as a concession to my wife,. we listened a lot to the Garth Brooks channel on SiriusXM. It’s not a huge concession, while we don’t share the same tastes in music, I do like some of Garth. As is typical with artist-specific channels on SiriusXM, the playlist includes selections of music that the artist likes to listen to.  In the process I rediscovered Jim Croce.

Most anyone in America that listened to FM radio from the late sixties on would recognize at least three or four songs: “Bad, Bad Leroy Brown,”, “I’ve Got a Name,” “Operator,” “I Have to Say I Love You in a Song,” and the song that shuts my ears down for some reason, “Time in a Bottle” are probably the most familiar songs. I kind of really hate that last song. It’s not that it is bad, just maudlin and represents the worst of seventies soft rock. My wife tells me it is song that tells us (me) how we are supposed to feel about love.

It’s a song that tells me that even the most talented artist can go too far.

For good or ill, I spent my early teen years in Northern Virginia listening to WASH-FM when it was an easy listening/soft rock station in the mid-seventies.  I really think much  of the music of the seventies was garbage. Whiny, too wistful. There was lots of good stuff but lots of really, really bad stuff. Songs that I still know the lyrics to when I really shouldn’t know the songs at all.

Croce was brilliant though. His songbook includes a variety of topical genres, with absolutely masterful examples of each, especially the “break-up” or “kiss-off” variety. Some of these I had forgotten, especially “One Less Set of Footsteps.” This is truly a great song.  It’s cheerfully upbeat with a pleasant melody, and lyrics the tell you all you need to know:

This last bit what gives lie to the cheerfulness. “If that’s the way that you want it,
That’s the way I want it more”  that’s the scream into the maelstrom of a person desperate to convince both parties that they are”okay.” It’s brilliant.

Growing up in the seventies also meant different television viewing options. Of course, by different, I mean “limited.” As a child, visiting grandparents on the wrong day and time could mean having to sit politely by during “The Lawrence Welk Show” (shudder) but earlier on Saturday, it was roller derby, which rocked. I loved watching the Los Angeles T-Birds with my paternal grandparents.

And I was just about old enough to really appreciate Raquel Welch in “Kansas City Bomber.” She was awesome.

Jim Croce’s “Roller Derby Queen” is one of his songs about larger than life characters like “Bad, Bad, Leroy Brown” and “Rapid Roy (that stock car boy).” These are rollicking songs that are kind of fun and crazy. They are also somewhat cartoonish, but they work. Just kind of adjacent to these songs is the truly great, “Working at the Car Wash Blues.”

Well, I had just got out from the county prison
Doin’ ninety days for non support
Tried to find me an executive position
But no matter how smooth I talked
They wouldn’t listen to the fact that I was a genius
The man say, we got all that we can use
Now I got them steadily depressin’, low down mind messin’
Working at the car wash blues

This is really a song for today. So many people on social media and elsewhere declaring their genius when all else is evidence to the contrary. Unfortunately, such people are either not working at something that suits their abilities or angry and resentful that their “genius” is not being recognized. In some cases, in some communities, the latter may often be truer than we think, but they are not who I am thinking about.

My wife has been going through photographs lately.  She is preparing two photo albums, one of which is for our son and his future bride. When he moved out of state last year I had given him an album that was mostly our scouting and other outdoor trips together. Over the years of these trips, I have generally taken at least

one on the way home of him sound asleep in the passenger seat. I hope that when he has a tween or teen of his own that we can go on a fishing trip together and he can get a picture of me sleeping the ride home. Lord knows, I will need the rest by then.

Looking at old photos can be melancholy. I look though, and remember those little boys and how much fun they were, and how innocent their laughter was. I look at pictures of me that span range of different sizes and weights. There is approximately 150 pounds of variance across the last 36 years. Perhaps more.  There are memories of family and dogs long gone. And more recently gone, like Lucy, who’s been gone a year this month, and Monty, who’s been gone a few years longer. 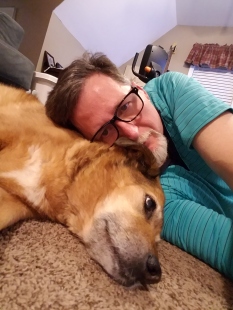 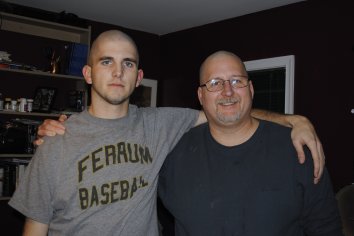 But there are also pictures of a mix of emotions. This is from eight years ago this weekend. It is from two nights before brain surgery when we shaved our heads together. That look on Zach’s face would be there for days, not knowing what to expect. He certainly was not expecting to spend a full day and a half waiting for me to come out of surgery.

Of course, this all ties to another Jim Croce song, “Photographs and Memories.” It’s a sad and wistful song, not quite as maudlin as “Time in a Bottle.” It’s a sweet song and to my ears, more pleasant to listen to than the other. It’s really about wanting to go back to the way way things were.

Photographs and memories
Christmas cards you sent to me
All that I have are these
To remember you
Memories that come at night
Take me to another time
Back to a happier day
When I called you mine
–Jim Croce, Photographs and Memories
It’s a good song, but doesn’t hit the way John Prine’s “Souvenirs” does.
I hate reading old love letters
For they always bring me tears
I can’t forgive the way they rob me
Of my sweetheart’s souvenirs
Memories they can’t be boughten
They can’t be won at carnivals for free
Well it took me years
To get those souvenirs
And I don’t know how they slipped away from me
-John Prine, Souvenirs
It takes years to earn the souvenirs we find in life, and then they slip away as memory fades. I guess it is just best to treasure them all while we can.
***
I can’t imagine the song “Which Way are You Goin’” ever got that much airplay. Certainly not when I was listening to the radio way back. It’s another song that feels so very relevant today.
Everyday things are changin’
Words once honored turn to lies
People wonderin’ can you blame them
It’s too far to run and too late to hide
Now you turn your back on all the things that you used to preach
Now it’s let him live in freedom if he lives like me
Well your line has changed, confusion rings
What have you become
Your olive branches turn to spears when your flowers turn to guns
Your olive branches turn to spears when your flowers turn to guns
I think we all need to listen to a bit more music. More singing and dancing, fewer parades.