Yesterday I wrote about my return to painting. I even went so far as to declare myself an artist because at the least two of the subjects of current efforts responded strongly to the work in progress. Laura explained her reaction in her blog. She also admitted that she is good at selfies. She’s wrong. She’s very good at selfies. Not only that, she is extraordinarily thoughtful and self-aware about why she does her selfies. This post where she demonstrates selfies as a form of self-documentation is an example of this. It led to my post exploring the changes in my face over seven years. 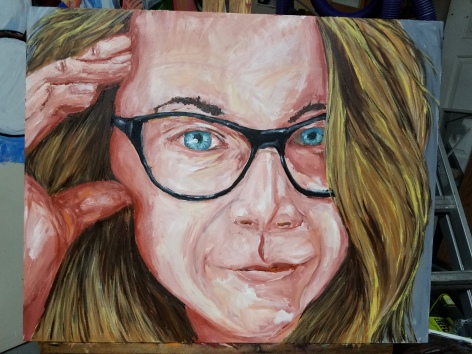 Laura says this: “I intentionally use my hair to hide the intensity around my eyes – I’ve never liked the way it looks. It looks too hard or hungry or masculine to me. I don’t like it but I can’t shake it and the only time I can erase it is when I have a beer and take the selfie laying down.” It’s not like the rest of us don’t see her intensity.  It’s hers, she owns it. Of course, I see it because I am a kindred spirit. Personally, I think her intensity is marvelous. There wasn’t any thought of not making an issue of it. I also had no interest in de-emphasizing that wry, wicked smile that happens so often.

Laura is a force of nature – bringing kindness and awesome intellect together with delightful good humor.