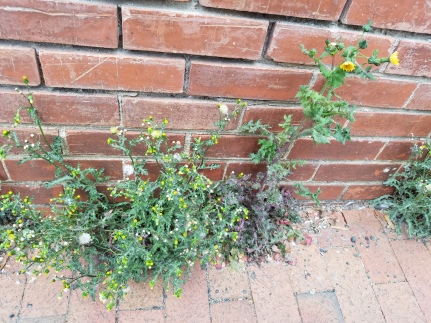 Wednesday afternoon, I was returning from my favorite coffee shop. I don’t think it is really comparable to some place tucked into a corner near the Champs-Elysees, even if it feels like it is, but it is a good place with good memories. I noticed these weeds. And I knew something.

They are kindred spirits. They are me.

I’ve often felt like I was squeezing life out of someplace I don’t really belong. After I had been at my agency for about three years, a former colleague from the agency told me there had been betting about how long I would stay. It seems I had rather quickly developed a reputation for not putting up with certain aspects of culture in play at the time. Sixteen years later I believe I have surpassed those expectations because of my flexibility and an ability to thrive in the spaces between hard places.

I have a thing for bricks. Brick walls, brick sidewalks, brick houses, brick outhouses, whatever the structure. There is a calming order to be found in brickwork. Order which has just enough imperfection to not be threatening in its orderliness. The varying reds combined with tuckpointed mortar is lovely. Brickwork also presents as strength and safety. Remember the third little pig? He built his house out of bricks.

There is something beautiful about these weeds. The mixture of greens, purples, and yellows is quite nice. They also have a protective prickliness about them to make one think twice about grabbing them with your bare hand to rip them out, or to eat them. They don’t comply with the traditional ideal of beauty, but they have their own. It’s a beauty born of fighting the system, of thriving in a place they are not meant to thrive, or desired to exist.

Against the orderliness of the brick work behind and below, the weeds seem wild. Extravagantly disordered. Unkempt and untamed. They transgress against the horizontal and the vertical. The weeds rise up, ignoring the lines that been set and create their own contours and their own sense of space. They break the rules. Mostly, they are ignored and unseen by the many people who walk these sidewalks.

So much of this is me. I don’t conform well against the ordered background. I stand out, when noticed at all. I have my own beauty, and my own prickliness. I try to thrive in the places that are least suited to me, and will generally do so. The lines of my life are anything but ordered, or straight, with few intersections of the perpendicular sort. The lines of my life are twisty and turny, with hidden surprises and pitfalls along at the intersections.

The weeds that grow in the spaces (spaces that are not meant to be spaces) between sidewalk and the wall live in a precarious position. They are unable to grow deep roots and can be easily pulled up and tossed to the street. They are unwanted as they challenge the status quo and what roots they have make damage by making the space between greater than it is. They slowly, so slowly, tear into the brick and reduce it to rubble, to dirt. Their beauty is not that of the rose, the tulip, or the lily, and is rarely appreciated or noticed.

If you pull them up, they come back. Persistently. As long as there is water and sunshine, their scattered seeds and the remnants of their roots allow them to be reborn. A cycle continues. And the slow rebellion of nature’s ongoing fight against orderliness continues.