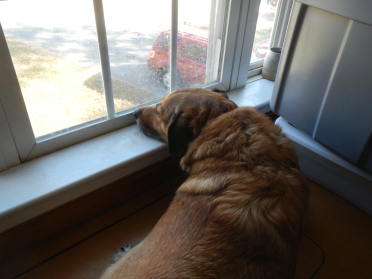 We found things to do
in stormy weather
Long may you run.

-Neil Young, “Long May You Run”

Ahh Lucy, I am going to miss you. You were meant to be Zach’s dog, and you were. But I was the “responsible adult” who adopted you from the shelter in September, 2004. You may have been Zach’s dog, but you knew who the big dog in the house was – me. Every time I came near, you rolled over to expose your belly to me. But to Zach, you were ornery. The first couple of years you chewed up so much of his stuff, and only his stuff, he called you “Lucifer.”

We walked a lot of miles, you and me. How many times did we walk the 1.8 or 2.0 mile loop in the neighborhood at night? How many more miles did we walk the trails in Pocohontas State Park?  I will always remember that Sunday night we were finishing the four mile loop around dusk. Something spooked you.You kept trying to turn back…but back would only bring us to the same spot miles later in complete darkness. I had no choice but to pick your 70lbs up, hold you against my chest, and carry you the last half mile.

You were never so glad to be put back down on the ground than that time.

You had a food issues. Like the time you jumped and took pork chop out of Melinda’s hands as she was about to put in the pan. No food on the counter was safe from you. And this only got worse when Monty joined the family. His greater size and willing mischievousness made you a dangerous pair. That time I came home and found the two of you had raided the pantry and emptied box after box of pasta across the first floor. Or worse, when I came home and found you two on the couch and gnawing on an entire chicken that Monty had taken out of the pot on the stove when mom left on errand. Monty ran upstairs and left you holding the bird.

Monty has been gone four years now. And now you are gone. I will miss every greeting at the door when I came home. Every walk we took. Rest now. Your pain is at an end. You can chase and catch the squirrels with Monty, like you two did on that Christmas day long ago.  Be at peace my friend.