“Folsom Prison Blues” is one of those near-perfect songs. More folk/Americana than country.

I hear the train a comin’
It’s rolling round the bend
And I ain’t seen the sunshine since I don’t know when,
I’m stuck in Folsom prison, and time keeps draggin’ on
But that train keeps a rollin’ on down to San Antone..
When I was just a baby, my mama told me. Son,
Always be a good boy, don’t ever play with guns.
But I shot a man in Reno just to watch him die
When I hear that whistle blowing, I hang my head and cry..

The bass line is easily identifiable. It starts and right away you know the song. You know also the “I shot a man in Reno just to watch him die” is one of most cold-blooded lyrics ever in popular music.

Today I heard the Surreal McCoys (“The top cowpunk band to ever come out of Notre Dame Law School”) and their mashup of Folsom Prison Blues and Led Zeppelin’s “Whole Lotta Lovin’.” It is a song I didn’t know I needed to hear.

And it is coooool.

Sometimes things just work. While I enjoy Jason and Scorchers covers of Lost Highways, Country Roads and Absolutely Sweet Marie, I like the blending the Zeppelin and Cash an awful lot.

But I also like the many versions of Stairway to Heaven, particularly The Geezinslaws cover which includes an inspired use of a kazoo. It is surpassed only by the Yayhoos and Dancing Queen which turns crap into something worth hearing.

Why did we never have a movie featuring Robert Preston as hucksterish university president?

We’ve got an article about the [outgoing] president of Duquesne University calling students libertine for living off-campus. You know, when the student newspaper publishes,

Dougherty made these comments as part of his address to campus faculty about the university’s financial situation. According to Dougherty and Vice President for Management and Business David Beaupre, there are 304 empty beds in campus dorms this semester. This means that only 92 percent of campus beds are occupied, compared to 98 percent in the spring.

It’s clear that you’ve got trouble. Trouble that begins with T, which rhymes with D which stands for Duquesne.

Libertine men and Scarlet women!
And Rag-time, shameless music
That’ll grab your son, your daughter
With the arms of a jungle animal instinct!
Mass-steria!
Friends, the idle brain is the devil’s playground!

I keep wondering about the campus housing scam when I look at the numbers. For example, DU reports $11,084 annual cost for room & board. This reader comment on the student paper editorial highlights cost issues:

Half of a Brottier room: Approximately $800/month.
Private room in a house within walking distance from Brottier: $320/month.
This is the only argument necessary.

To be fair, DU has to collect money to cover things like security, maintenance, acquisition cost of the facility, all that stuff. Further, walking away from on-campus housing is probably not a viable choice, and a certain amount of research on traditional populations of students suggests living on-campus is a good thing. On the other hand, if I were to think like a bureaucrat, I might think, “Geez, what has he stepped in now. Has he just claimed that students living on campus do not drink or have sex or whatever? That somehow DU controls that? Does DU now have an assumption of liability for student behavior it previoualy did not?'”

With an average Net Price for DU’s poorest students of over $17,000, the president might want to re-think his accusations and accept the cost arguments at face value. Especially when the average student is now borrowing $10,000/year, with median graduate debt of $27,000 a couple years ago, excluding PLUS and private loans.

..you know they showed you statue, told you to pray
Built you a temple and locked you away
Aw, but they never told you the price that you pay
Only the good die young

Humans are funny creatures. Their funniest aspect is ego. Too often they seem to think that their awareness of a thing defines its very newness. Just as Columbus “discovered” North America, despite the fact not only it was never lost or undiscovered as it was already peopled, modern Hus act as if the length of their professional career represents all the known work of a field.

Just because you have not seen the work doesn’t mean it doesn’t have an extensive history.

Just because you and others did not develop a need for something until recently, doesn’t mean it hasn’t been done.

I understand that is a lot of work and effort to actually do research beyond the first three pages of Google results. I get that. Even a profession as young as the one I am in, a mere 50-plus years, has a fairly rich history of work and development. And much of that work has not been published in the journals. Why? Because very few people thought it necessary at the time. They might have thought a new thing was cool or interesting, but it wasn’t relevant to their concerns at the time.

When this happens, almost no one checks to see if this thing has been done before, if it has a history.

I once teased a senior colleague shortly after he received the top award in the profession, “So, does this mean you are going to write something new instead recycling the same old things?”

“Why should I? Until they read what I have written the last 40 years, why write something new?”

And in 2015 it means to be read it has to be in the first couple of pages of a half-assed Google search.

So, get the hell of my lawn. Come back when you have done your homework.

Thoughts in response to John Warner (@Biblioracle) and some of the commenters on this piece at InsideHigherEd about Uber for higher ed.

Perhaps if the original essay had not been bracketed by these two unfortunate paragraphs:

For more than 100 years, taxicabs were the kings of the road. They set prices and buddied up with lawmakers who promised to help them keep the meters running. Then, in 2009, an app changed everything. Uber created an interface that finally put the passenger in charge of the ride, and the taxicab establishment has been in chaos ever since.

It sounds farfetched, but so did hailing a car from the comfort of one’s own bed just three years ago. I believe there is someone out there who is on the verge of creating a sort of UberEd, and it is almost certainly not a university president or federal lawmaker. Instead, it’s an entrepreneur who grasps the importance of putting students first who stands to start making waves in higher education.

First, I am not quite sure how Uber actually puts the passenger in charge of the ride. The passenger is still just a passenger, 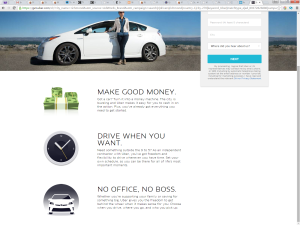 a rider. And, Uber’s website makes it pretty clear that it is all about the driver, not the passenger. I mean seriously, this is a top-linked page of Uber.com and it looks to me like an apex predator recruiting secondary predators to fleece the sheep. Or perhaps Barlow in ‘Salem’s Lot, the primary vampire creating lots of dependent vampires. Or your typical MLM.

The closing paragraph ignores that for most of the 100 years of taxi cabs referenced in the first paragraph, one could call (using a phone, albeit a simpler phone than a smart phone) to arrange cab service as Warner points out in his call for Uber for Lobbyists.

Given Uber’s recruiting page, I am pretty confident that I don’t want (another) entity that makes such claims to “put students first.”

Warner is “concerned that our lobbying and consulting class has run out of ideas” which may or not be true. The bigger problem, as I see it, is for whom they lobby, and why. I am not aware of any lobbyists for higher ed writ large. I am aware of some that claim to be, but in reality they lobby for member organizations who look to protect their pieces of the pie. There are also thousands of lobbyists for individual institutions that do make the occasional stand for the good of higher ed, but are generally more focused on the needs of their particular institutions, as they should be. The assembled groupies in the building at One Dupont Circle have very clearly degraded into territorial fighters (my apologies to any friends painted with this broad brush, but I forgive you) for their own interests.

I am not clear who is really lobbying and fighting for higher ed in general. (I may just be generally ignorant though.) I do have really strong ideas about who is not.

However, these are the minor problems. The truly big problem is that the Uberization (and other -ations) of education is a return to the 1970s and the “Me Generation” of the Boomers. (And if you recall, the best proposed solution to this was the “Al Franken Generation.” Sigh.) Uberization is all about me, my needs, my money, my costs, and the continued efforts of disruption to ensure that no one ever pays for anything they don’t wish to pay for. Of  course, this is myth since most folks never see how revenues and profits are spent. It continues down a path that forsakes education as a public good.

Maybe I am wrong to hold onto a belief in the public good. Perhaps we will all be better off when nearly everyone is contingent. Nobody will have to worry about stuff happening because whatever they do will only be of the moment. Pick up one passenger, drop them off, pick up another if you want. Ratings will matter for some users, but for others there will always be someone who simply needs a ride. After all, payday lenders are not the most affordable nor most pleasant experiences, but they get heavy use. We’ll always be moving on to the next thing, and everything will always be contingent because we will be the boss of everything.

We’ll be the boss when we drive.

We’ll be the boss when we ride.

We’ll be independent contractors in charge of our future.

In education, we’ll be the teachers.

We’ll be the student.

We’ll be the funders.

We’ll be the aggregator.

We’ll be the experts about what we need.